Do you remember the days when a single moving head light would cost upwards of $300? Isn't it amazing how far technology has come?

Who knew that you would be able to get high-quality moving head lights for under $100 each!?

It's now easier than ever to get a professional looking light show for your mobile DJ gigs. And one crucial element to a professional light show is moving lights. While I wouldn't consider myself a lighting expert, I have been around long enough to know what to look for.

I understand that the average DJ isn't going to have the budget to afford a huge selection of lighting options. But I do believe that having at least two lights that can move is an integral part of a fantastic light show.

Let's see if we can find a few lights that are both affordable, yet still pack that punch you'll need.

Before we get started if you aren't familiar with DMX lighting and DMX controllers, be sure to quickly read the guides I threw together (they're short) to get yourself orientated.

Without further ado, here are the best moving head lights: 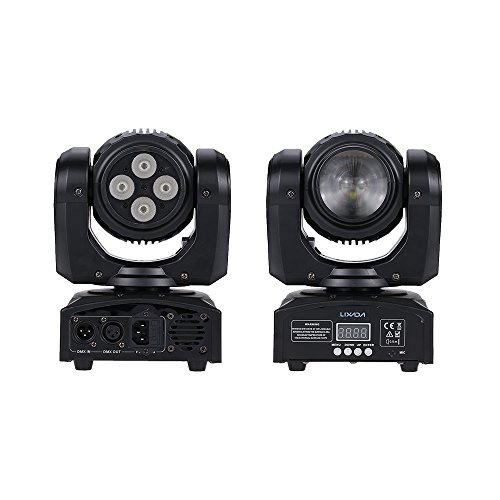 The Lixada is likely one of the best values you are going to find on the current market. When scoping out moving head lights I usually pay attention to the wattage of the light (while not always perfect, it will give me an idea of the brightness) as well as the light spectrum and number of channels.

In terms of the basics, the Lixada has you covered. The RGBW color spectrum is going to give you more than enough options when it comes to light color. Additionally, It has the second highest wattage of all the lights on my list.

For the beginners out there, this style of LED lights combine different levels of light bands (red, green, blue and white) to form different colors.

The feature that really stands out to me is the double sided wash and beam. Instead of only using a single side, this light uses two different configurations. This means you can get both the spotlight and the wash light effect out of a single light!

The only thing that is missing for me here is the inversion mode (where two connected lights move in opposite directions.)

This light is my top pick! 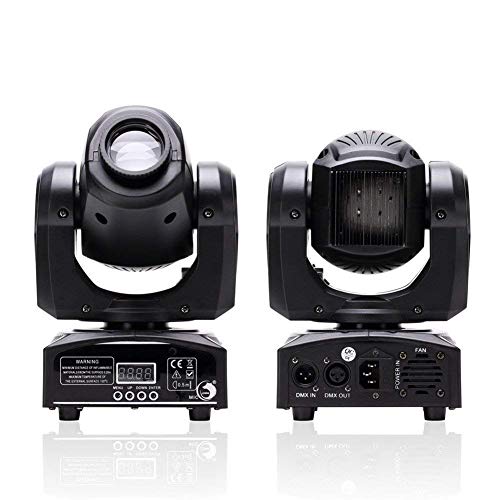 The U'King is the most popular moving head light on Amazon right now. Before I get into what I like about it, it's important to note that the light is sold as a single. I know it shows it as a double in the pictures, but the price is for each light sold separately.

To be honest, I don't really know why this light is outselling the Lixada above. You still get a very similar product with pre-programmed shows with comparable light spectrums. The first thing I notice is the U'King has a lower wattage. Theoretically, they will be less bright. You are also getting fewer channels (only 7/10.)

One feature you are getting that is unique is the ability to split the light beam in two. This gives a nice effect that is missed with most other lights. While you aren't getting a $1000 performance, you will be able to connect these lights to your existing DMX chain without any issues.

Have a look at them in action below. Personally, I think the Lixada is a better value. 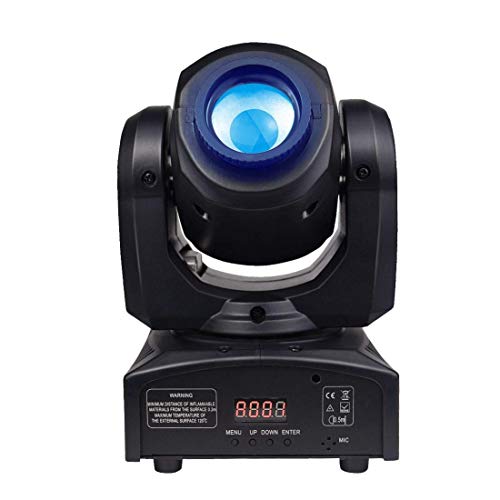 Here's another budget option you can use to compare the above lights. Right off the bat I notice it's only 10 watts. 5x less than the Lixada. You are limited to only 7 different colors (plus white). However, it does come with 7 built-in gobos.

What's a gobo you ask?

A gobo is simply a built-in light pattern. Think of a star shape or maybe a few different circles. They can be fun, but I find them to be a little tacky. Personally, I don't really want to pay more for extra gobos, but if this is something you're looking for, it may be a reason to skip the Lixada.

Otherwise, everything else about this light is pretty standard. Similar to the U'King you get both the wash and the spotlight effect in the same light. It doesn't come with any pre-programmed light shows - an important feature to have for beginners.

Finally, you cannot use any different gobo slides. This means you are stuck with stock gobo selection. 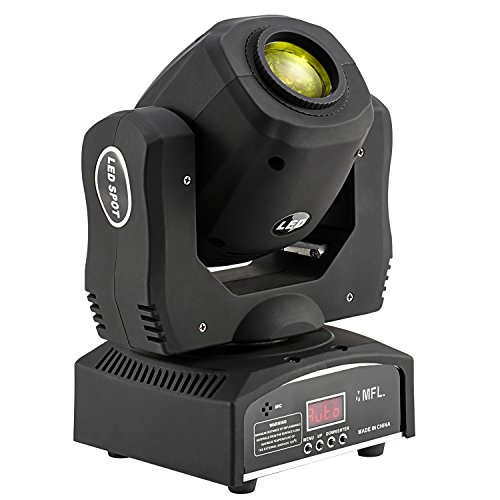 First thing - 60 watts. The most powerful light on my list so far. Unfortunately, it almost costs $100 more than the cheaper lights above. Is it really worth it?

Personally, I don't think so.

But, if you want to splurge on a little more quality than I think it could be a good option. You would be getting 8 different gobos and still have plenty of channel modes (8 & 12.) However, the light is lacking in a few main features that are deal breakers for me.

I do like how it has a few built-in auto-run shows. There have been no complaints of a lack of brightness or a lack of color options.

All things considered, not the best option for beginners. 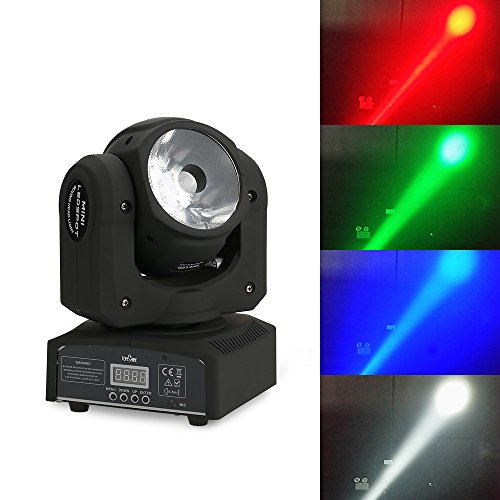 Finally, the last option on my list. It's the brightest of the bunch at 60 watts. The digital display will help you set the mode as well as your channels. There are currently two options available - a 60 watt and an 80 watt. The 60 watt is lacking gobos.

Otherwise, the light has all of the standard features. In my opinion, there is really no reason to purchase this over the Lixada. It's slightly more expensive with only a slight boost in wattage. There have been only positive reviews with a few complaints on how loud the cooling fans can get.

Similar to the MFL above it's lacking any pre-programmed shows. If you are okay with programming your own effects then this isn't something you'll need to worry about, if not - find another option.

Some Considerations For Selecting Your Moving Head Lights

Before we dig into this section, I think it's a good idea to remind ourselves of the power of moving head lights with a short video:

The number of channels of the light is going to determine how many effects you can assign. For instance, you will assign one channel to pan, one to strobe, one to tilt, one to the color wheel, and one to the gobo, etc. The more channels you have, the more control (obviously.) I won't buy anything that has less than 7 channels (unless the light doesn't have gobo.)

Programming your own scene isn't that hard once you wrap your head around it. A cool feature to look for is the inversion function. This is where you can program a scene for a single light and have the adjacent light do all the same motions but in reverse.

I usually like to see the light having the master-slave functionality. This makes programming much easier. This is similar to the inversion function mentioned above but all of the movements are the same instead of reversed.

Should I Get Spotlight or Wash?

In my opinion, having both is important. Which is why I love dual feature lights.

All things considered, the Lixada is still my favorite budget/beginner-friendly light on the market.